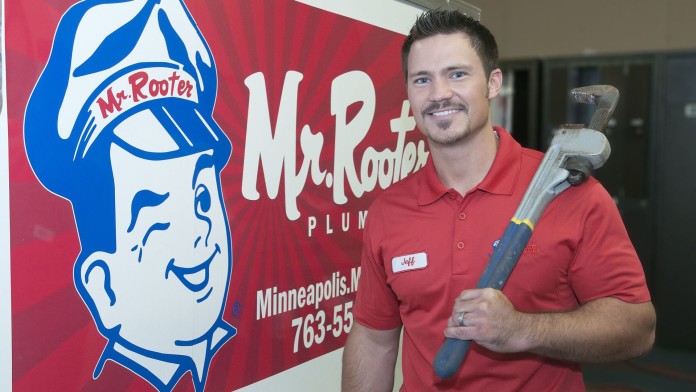 Jeff Strom became a plumber the old-fashioned way – through an apprenticeship. “You find a master that’s willing to take you in,” he said. “I worked there seven years. It took me five years to get my journeyworker’s license. Then you have to take a five-hour test. Then you wait a year to take your master’s license.”

Strom acknowledges that when he started 11 years ago, the economy was booming, which probably made it easier to find the entry-level position. A vocational program might be a better bet these days, he said. “A company’s going to want to hire somebody who has a couple of years of experience at least, so they don’t have to babysit,” he said.

As beginning apprentice, he said, “Basically you’re the grunt. You have a shovel, and you dig the trenches for the ground runs. Back when I first started it was all pretty much new construction. You cut pipe for the guy in charge, flux up fittings and sand them. You drill holes in two-by-fours.”

Although the journeyworker license requires 10,000 hours of on the job training, Strom said, “If you’re a quick learner, you get to do other things – put in a water heater, install a boiler, lay out a house. Right around three years into it, I was plumbing my own houses.”

Strom is now 11 years into his career as a plumber. A year ago, he started working for Mr. Rooter Plumbing in Fridley. “We’re an all-around company,” Strom said. “There isn’t anything we can’t handle.”

There’s something new every day. It’s not always the same thing. It could be a backed-up drain one day and a nice new addition the next.

What’s your least favorite part of the job?

If I have to get into an attic if it’s 90 degrees outside, that’s pretty rough. There’s insulation and stuff in the attic, so you have to put a mask on.

What does it take to be a good plumber?

Basically, you’ve got to be good at using your hands, using hand tools. You’ve kind of got to be in shape if you’re going to go up and down ladders every day. If you’re dealing with a homeowner, you’ve kind of got to be outgoing. You have to help them understand their problem and fix the problem that’s there. You can’t do more than they want to do.

Have you ever had a plumbing disaster?

The first disaster I ever had was probably cutting into a water line and forgetting to shut the water off to the house. You learn from your mistakes.

Now that you’re a master plumber, what’s the next step in your career ladder?

As you get older, you try to find either an inspection job or a shop that wants a master, and you go out and do the bid work. In five years, I hope to be running the bid work for the shop.

What maintenance advice would you give to homeowners?

If you ever find your toilet starts to rock, get it fixed. It usually just needs new bolts or a new flange. People let that go. When they finally call, the whole floor is rotted. Drain your water heaters at least once a year. If you don’t drain it out, it’s going to rust out a lot faster.

Any advice for would-be plumbers?