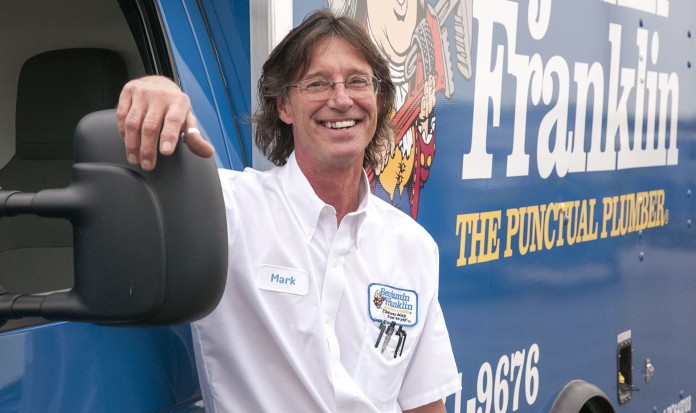 Mark Parsons is a Master Plumber with Benjamin Franklin Plumbing in Minneapolis.

“My dad was a football coach and English teacher. I wanted to take a year off after high school, but he told me to go to college,” Mark Parsons recalled. Parsons earned an associate degree in business administration, then took a year off. “I had my own painting and Sheetrocking business. I didn’t want to sit behind a desk,” he said.

On the other hand, Parsons didn’t want to make a career of painting and Sheetrock. “I thought, Who makes the most money? Electrician or plumber.” Back in 1981, as now, training programs for plumbers were hard to get into. “I went up to Wadena and took an 11-month course – I finished in nine months. Then I went looking for a job in the Twin Cities.”

He worked nonunion jobs for a while until he could get transferred into Local 15 in Minneapolis. He worked on custom houses and then “slid into commercial. I probably went through four commercial outfits,” he said. His last commercial project was the Mall of America. “I submitted a rÃ©sumÃ© – everyone wanted to work at the MOA, so they said you have to submit a rÃ©sumÃ©. They took me right off the bat. I had a lot of experience,” Parsons said.

When the MOA job was complete, Parsons was picked up by a Twin Cities company specializing in residential repair. Several years later, that company and two others merged to become Benjamin Franklin Plumbing. “It was the first in the state. It’s a national franchise,” Parsons said. “The good thing about it is that all these people I used to see putting bids in – all of a sudden I’m working with them. They’re really knowledgeable people. They run a tight ship – you’ve got to be a hard worker. You have to go through two interviews, a background check, a drug test. They have training meetings once a week – we all get more knowledgeable.”

I’m usually mobile – I see three or four people a day. I like the travel and the freedom to decide how to go about doing the job. I like people. I’m a people person. A lot of times with the service, people just want to punch a clock and do their work and go home. You have to be able to communicate and talk to people.

What’s the best part about your job?

I like the hands on. I like figuring out things. I’ve worked in 100-year-old houses all my life. They usually send me to the tougher kind of jobs – if they don’t know where to put a job, they’ll give it to me and I’ll figure it out.

Winter and road construction. Last winter was probably the weirdest I’ve ever seen. The cold came so quickly, so early. We went from frozen pipes in houses to frozen water mains and frozen sewer mains. You just got over one wave and a new thing happened.

What are some trends in residential plumbing?

Some people are really going to the tankless water heaters. Water purification is another thing. People are thinking about water quality more and more.

What advice would you give someone about getting into the field?

As long as they’re hard workers, stick to it, pay attention, follow the rules, they should be good. I think housing is coming up, and commercial is big with the stadiums.