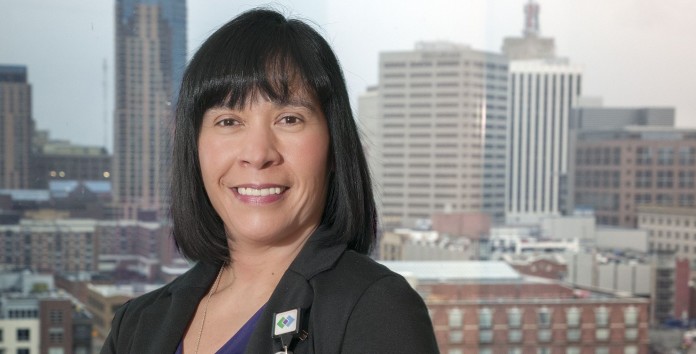 Georgina Hankerson is a Spanish Medical Interpreter at Regions Hospital.

You could say that Georgina Hankerson’s career was prescribed by her doctor. “I went to my appointment, and she said, ‘You’re bilingual. Have you ever thought about doing interpreting?’ I said, ‘Is there such a thing?'”

The doctor provided a contact name, and Hankerson started exploring. She began working with a contract agency, then did the 40-hour Bridging the Gap training. She got additional training from the University of Minnesota and received certification from the National Board of Certification for Medical Interpreters.

Hankerson’s career has advanced from on-call work to full-time employment at Regions Hospital.

“You’re bridging the gap between the provider and the limited English proficiency speaker,” she said. “You’re in the room during every encounter. The provider says something, then I interpret, the patient speaks, I interpret.”

Hankerson, who is originally from Mexico, also acts as a culture broker during patient encounters. “People believe in some sort of things, and you know about those beliefs. You can probably explain to the provider, ‘In my country we practice this, we practice that.’ They can understand when a patient is talking about something. They have a better understanding.”

Van Dyke said medical interpreters are in demand, with an 8-10 percent increase over the past year. As health care providers meet the demand with more staff interpreters, they are also increasing the training requirements. HealthPartners requires staff interpreters to complete a minimum of 40 hours of interpreting training and in 2015 became the first health system in the Twin Cities to pay a higher rate for interpreters with national certification, Van Dyke said.

After almost 10 years in her current career, Hankerson said, “I really love what I’m doing. I probably will keep doing it. It’s very rewarding being able to help others.”

No single story stands out, she said. “It’s in every encounter you see that your goal was met. I think you feel good about it – at least in my case.”

What are the common patient encounters you interpret for?

I’m in the hospital now, so it’s a little different from when you are in the clinic. In the clinic it’s more like cataracts. In the hospital, there’s the emergency room, labor and delivery, the cancer center, surgery.

How many cases do you have in a day?

It varies. Some days it can be eight to 10. Some days it’s only three or four. But in the hospital, one encounter can be several hours.

What is the biggest challenge?

It’s not always good news. Then it can be a challenge. You have to separate your person from the professional work you’re doing. I guess with time and experience you learn how to separate those two persons. It can be a little challenging, but you’re always going to be interpreting and treating everyone with the same respect. Grumpy, mad – you still have to treat everyone with the same respect.