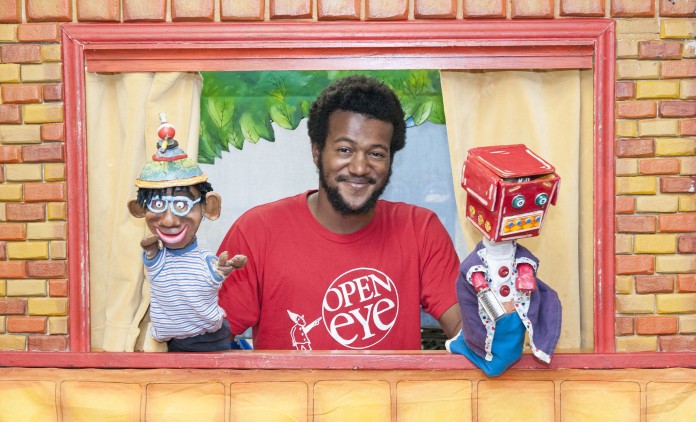 Cage Pierre is an actor in the Open Eye Figure Theatre Driveway Tour in Minneapolis.

“I have been acting all my life,” Cage Pierre said. “My mother had me in baby beauty pageants. Then she put me in theater when I was in elementary school. I was the Sugarplum Fairy in The Nutcracker before I could even walk straight.”

Born and raised in Houston, Texas, Pierre took the advice of an alum from his high school and auditioned for the University of Minnesota/Guthrie Theater BFA Actor Training Program. He will go into his fourth year in the program this fall.

This summer, Pierre has been performing as a puppeteer in Open Eye Figure Theatre’s Driveway Tour. “A friend of mine did it last year, recommended me for it, and I auditioned,” he said. It’s his first experience in puppetry. “It’s an entirely new learning experience. It’s like a massive piece of choreography.”

The show, Tucker’s Robot, uses “traditional hand puppets,” Pierre said. “It’s basically like the sock you would find in your drawer, but much better material. It was created and painted by our director.” Each of the two actors in the production operates about 10 different puppets in the course of the half-hour show.

After three weeks of rehearsal, Pierre has been performing three to five times a week, for a total of 43 performances over the summer. Open Eye Figure Theatre has sponsored the Driveway Tour since 2003. Individuals and neighborhoods can request a performance in their backyard, and additional performances are scheduled for neighborhood parks and other venues.

“The backyard is always the best. All the guests will bring food. It’s an amazing potluck. We’ve performed for anywhere from six people to 85, maybe. The best is right around 60 – everyone’s still in front, the kids are right up close. Parents always wind up watching and laughing harder than the kids,” Pierre said.

What’s the best part of the job?

It’s between showing off the puppets at the end, all the corny jokes that make people groan and laugh during the show, and talking after the show over watermelon and lemonade.

What’s the hardest part of the job?

The hardest part, really, is like we had six flights of stairs we had to get up with the puppet booth. After rehearsals, the director goes to two or three shows. After that, we have a list of shows, the names of the hosts. We go to the theater, get the equipment, and do the show. It’s like three very small theater companies.

Was this a good learning experience?

This has immensely helped me as an actor. This the first time I’ve done a show that runs longer than four performances. It teaches me to persevere when I’ve done the same joke 30 times. These puppets are heightened representations of real life. What is too much – too actorly?

What does it take to be good at this?

You have to have a full sense of play. Playing is a serious thing. It is a lot of fun but it is serious fun. What you’re doing is taking a piece of fabric and waving it in front of 60 people and saying it’s alive and made of tissue. If you can’t find the joy in that, you have no business in the theater.

I’ll be doing Chekhov at the U in October and I’ll be at Park Square Theatre in November. 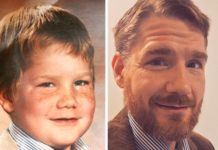 The Hyphenated Career: Saying “Yes, and….”