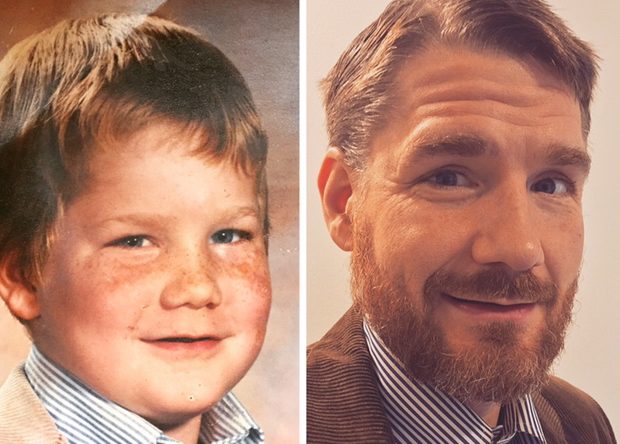 Weinhagen’s first love–and the foundation for all the rest–was improvisation. By the time he discovered improv, he’d already tried and abandoned chef school and work as a certified personal trainer. “Improvisation is my grounding about how to do any kind of work with people,” he said. “What happens when people come together and try to do something bigger than themselves? That’s the question I’ve been trying to answer for the past seventeen or eighteen years.”

Weinhagen started taking classes at the Brave New Workshop when he was 19. “I did definitely think that would literally be my career. I was interning, taking classes, working in the box office at night, serving drinks and selling tickets. I think I locked into that for a couple of years. Inevitably, you have to find ways to make an income: Temp jobs, retail jobs, on-camera acting jobs, any other weird random things.”

Among those “weird, random things” was a gig wearing a sandwich board and pacing the sidewalk. Thanks to his background in improv, which teaches that the right answer to any situation is “Yes, and,” Weinhagen said, “I totally told myself, ‘what a creative exercise!'”

Ultimately, though, the improv career “didn’t fill me up. There’s no real control. In most of those jobs you’re asking people for the opportunity to do what matters to you. I found people who realized we could make up our own stuff. The finances were different–we had to put up some money and risk not making money. I still perform pretty regularly but I don’t think of myself as an actor and I don’t think of myself as having failed as an actor. It’s just a new way of doing what I care about,” he said.

However, Weinhagen’s hyphenated career never strays far from the principles of improv. “You’re not just saying yes to an idea. You have to find ways to build on it. You grab onto it and run with it–usually with other people. It’s a perfect way to do things: ‘Ooh–that thing you just said. What could we do with it?'”

He’s a co-founder of the Comedy Suitcase, which produces scripted shows for audiences of all ages–although the scripts are based on lots of improv and “In the shows, we’re fairly loose so it continues to have the feeling of improvisation.”

In 2006, he started listening to podcasts, and in 2012 he began producing his own podcast, “The Pratfalls of Parenting.” The podcast consists of interviews with artists who are also parents, talking about “where those things intersected.” It turned out to be a great way to build a network, Weinhagen said. “People started listening to it and reaching out to me. I made a little bit of money but I got a ton of new opportunities.”

Those included producing content for American Public Media and the Walker Art Center. “I’ve gotten chances to edit magazines and do other things. People said, ‘You’re really good at getting stories out of people. Can we hire you to put together stories for us?'” His new podcast, Not About You, is about “identity and social justice.”

Weinhagen is also on the COMPAS teaching artist roster, teaching improv and joke-writing. “It’s about education standards and confidence-building, but I’m also teaching the tools of comedy,” he said.

These days, Weinhagen has a clearer view of what he should say yes to. “When I ‘m deciding to take on a project, I am trying not just to better understand people, but also to create ways for people to understand each other. That’s an acceptable career path. I do that in communication work with foundations, making theater, podcasts, with students in classrooms. Mostly I want it to not be about paying attention to me but learning about each other.”

What are the advantages of a hyphenated career?

There’s no job stability anymore. That’s throwing a lot of people off. We’re already used to that. People who do the hyphenated life think, “why would I want everything in one place?”

What are the disadvantages of a hyphenated career?

Health insurance. Financial stability. What keeps a lot of other people from making their own things is safety around health. That’s very real and it’s never not stressful.

Also, you’re never off the clock. It can be really challenging to have your own personal life. I do a lot of things that I want to do, and I don’t want to be off the clock.

People find a lot of social relationships through the workplace. That’s different if you aren’t consistently working with one client. You have to make a more concerted efforts to have real friendships. I’m lucky that I do enough collaborative projects with the same group of people.

How would someone know whether a hyphenated career is right for them?

One thing that maybe speaks sideways to that question: We need to find ways to get from the question of “am I going to do this thing?” to “how am I going to do this thing?” We spend a lot of time trying to figure out whether, and instead we can just make a plan for how it’s all going to fit together. It’s like a capsule wardrobe, where you reduce the number of choices. If you can eliminate some questions, it’s going to help a lot.

See if there’s a true line to what you’re doing. Look back just a little way and see what’s the path I’ve been creating. That will help making decisions–”I tend to walk this kind of way,” or “I want to change the path.” Don’t feel powerless to make those changes. We still have agency.