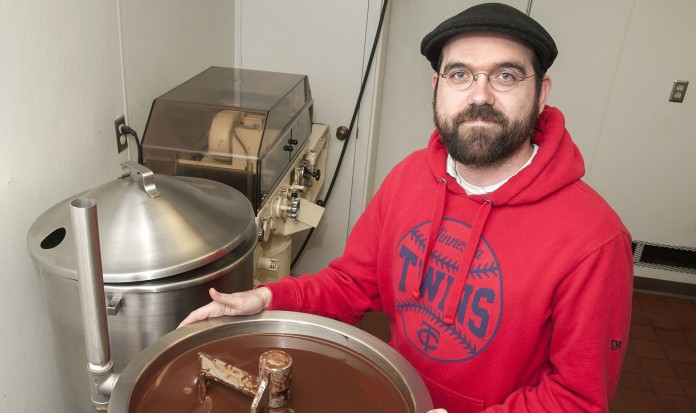 Peter Maccaroni is Operating Partner and Chocolatier for B.T. McElrath Chocolatier in Minneapolis.

Peter Maccaroni has degrees in culinary arts, hotel-motel management and pastry. Being a chef was “what I had trained my whole life to be,” he said. He worked in the field for 12 years, until his son was born. “I wanted more time at home,” he said.

Six years ago, he answered an ad placed by Brian McElrath, founder of B.T. McElrath Chocolatier, a 17-year-old Minneapolis company. “I think it said Chocolate Production Assistant,” Maccaroni recalled. “I thought, ‘I’ll give it a shot.’ Brian asked me a bunch of questions about chocolate. I may have gotten a couple of them right. He’s also a chef – he must have seen something in me.”

Maccaroni called his early days at the company “a humbling experience. Tempering five pounds of chocolate in a restaurant is night and day from tempering 500 pounds of chocolate here. Honestly, on my first day I was just, ‘What did I get myself into?'”

The biggest difference, Maccaroni said, is “time management. We have eight things to do, each takes this much time, and we have one piece of equipment to do them. It requires multi-tasking, speed and efficiency – but with a tremendous amount of accuracy. In the kitchen if you mess up the soup, you can throw some salt in it. Here you lost all that day’s production if you didn’t do it right. You feel a sense of defeat, but you come back and rally – you have to do two times the work the next day.”

Maccaroni was named Chocolatier for the company in 2013. “It was a very proud moment when I got that title. There’s only one chocolatier for a company. It’s similar to executive chef,” he said. “There’s a lot of opportunity to impart my vision.” For example, a new Changemaker Chocolate Bar is a partnership between B.T. McElrath, Dunn Brothers and the American Refugee Committee, with a portion of sales donated to the charity.

How do you create a new chocolate product?

Scalability is an issue. You always have to start small. I will do five or 10 variations of a like item. Then we pick and choose. You’d think you could take all the best features, but that doesn’t work. We narrow it from five or 10 to one or two. I get feedback from the production staff and Brian. Then it goes to press.

What part of your job is the most fun – besides the chocolate?

I have this really fancy title, but I maintain equipment, do dishes, mop floors. We have a lot of German equipment. It’s very expensive to fly someone to the U.S. so I started to read the manuals. It’s not sexy and interesting, but it’s one of my favorite things.

What are the challenges?

I have failed spectacularly at creating a beer truffle. None of the methods have worked. I’m getting closer.

Is Valentine’s Day your busiest time?

Our busy season is the end of August to the end of March. We start producing for Valentine’s Day in December, sometimes earlier. We get a couple of huge rushes, then it dies down. Retail has discovered that something like 85 percent of Valentine’s Day purchases are made on Valentine’s Day by men. So retailers hold off on orders. We use fresh ingredients, so there is a short shelf life. The first two weeks of February are very intense.