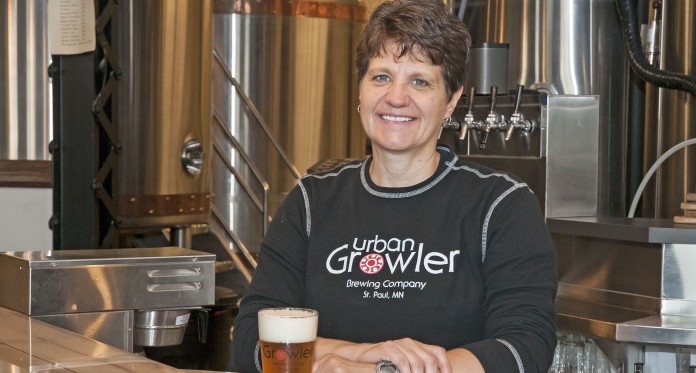 “When I was a kid, I’d get up a 6 a.m. and there was only one thing on TV: Sunrise Semester. It was calculus class,” Deb Loch recalled. “I’d get those little science and math workbooks in the grocery store – I thought they were fun.”

Loch became a biomedical engineer with a graduate degree in biomechanics from the University of Minnesota. She worked at a number of medical device companies. “It was very rewarding,” Loch said. “It was also a lot of pressure.”

She started home brewing as a hobby in the 1990s. A decade or so later, “my job had become more project management. What I like to do – make things, break things – I was getting away from that. Brewing beer was rewarding. It was good. It was something to share – people loved it. It created an obsession.”

She took an online class through the Siebel Institute, then spent a year as an assistant brewer at Minocqua Brewing Company in Wisconsin. “I was working in 100 degrees, covered in sweat, flour and yeast and still loving it,” she said.

She did the yearlong master brewer program at the University of California, Davis, then interned at Summit Brewing Company in St. Paul. “I had the opportunity to work in all parts of the brewery: the lab, brewhouse, the cellar, marketing, purchasing. I got paired with a brewer. When the brewer was on at 2 a.m., I was on at 2 a.m.”

Loch and partner Jill Pavlak opened the Urban Growler microbrewery in St. Paul in August. “I felt like the grand opening was living the dream. All those people having a good time. That’s what it’s really about – bringing people together through beer,” Loch said.

What is your role at Urban Growler?

I am the general manager here, but I spend most of my time in the brewery. It’s all fun. I still like cleaning. I like recipe development – taking small-scale recipes and figuring how they fit on this system.

Is it less fun to run a business than to brew beer as a hobby?

It does not take the fun out of it to make money. It adds an element of pressure: When my equipment went down and my flagship beer is sitting at 50 degrees the night before Senator Franken and 100 campaign workers were coming.

Have your engineering skills transferred to your new career?

Being a medical device engineer is perfect training: Understanding equipment, processes, microbiology – it’s all important in brewing. I was a project manager in a regulated industry. I am aware of legal aspects, trademark issues. Being a scientist, if I make a 5-gallon batch, I make it a minimum of two different ways. I change the yeast, change the hops, change the temperatures, add some spices. Sometimes I split the batch five ways.

Do you have advice for other people who would like to start a business?

I was our own worst enemy – the fear of giving up a very comfortable salary at a top-notch company. That was hard to do, but was the best thing I could have done.