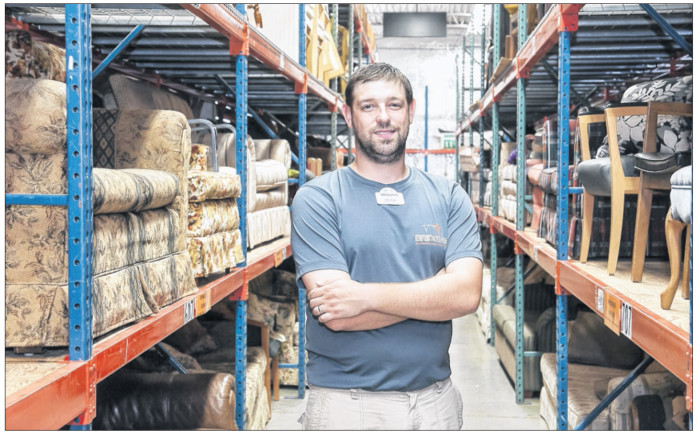 Bob Auge is the warehouse supervisor for Bridging in Bloomington.

The first time Bob Auge came to Bridging was with his church youth group. “It was one of the more fun volunteer jobs that we did,” he said. “I always wanted to go back. About 10 years later, I was working as the assistant warehouse manager at a pool chemical company. I had a newborn son, so I was looking for something cleaner and more rewarding. I found this place called Bridging, and I thought it sounded familiar.”

He interviewed for a warehouse management job at Bridging, but lost to someone with more experience. They offered him a general warehouse position with the chance to move up. Auge took the job at a pay cut. “It was a leap of faith, but it resonated that good people are getting together and doing good things on a daily basis. It was an easy choice to make,” he said. He moved quickly into a lead driver position, handling donation pickups and deliveries, and then into his current role.

“It was really fortunate it happened like that,” Auge said. “If I’d gotten the job right away, it would have been overwhelming. It’s not just inventory of things – it’s things, people, places, time.”

Bridging provides donated furniture and household items to people transitioning out of homelessness and poverty. “We provide 75 bed sets a week at a bare-bones minimum,” Auge said. “We provide 56 sofas. At the end of last year, we had served 70,000 families.”

After two years at Bridging, Auge said, “I’ve had jobs that I liked – either it was an easy job or I liked the people I worked with. This is the first job I’ve really loved. I used to say, ‘A bad day fishing is always better than a good day at work.’ That’s not really true any more. They’re pretty even.”

It all depends on the weather and the day of the week and how many people show up at the door. We’re accepting donations six days a week and delivering four of the six. I tell volunteers I never ask them to do things I haven’t done or wouldn’t do. I’m only behind my desk for a short period of time. I prefer to work hands on. I build better relationships that way. I like to stay in the warehouse, but when needed, I will do deliveries and pickups.

The greatest part about my job is the people I work with. We have over 700 regular scheduled returning volunteers and 2,000 individual group volunteers a year from churches and corporations. That’s on top of eight staff members at my location right now.

Juggling it all. When it starts getting cold a lot of volunteers move to Arizona and Florida. Intake moves down – you don’t want to move a couch or furniture in December. We have to plan accordingly throughout the year. We always say we need three things: Money, muscle and your stuff. Everybody has at least one; some people have more.

Did you know you were suited for nonprofit work?

I grew up in a middle-income family. I was a little spoiled. But when I ventured out on my own, I realized there’s more than money and possessions. I didn’t know that when I was in the church youth group – I wasn’t there by choice.