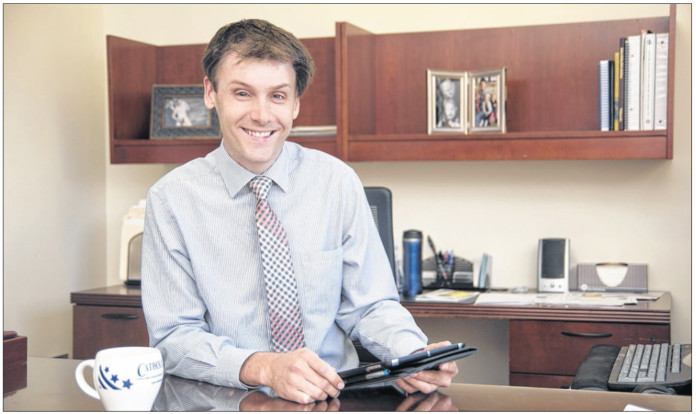 Nate Lamusga was a classical guitar major. “I wanted to make music for a living. I never expected to be sitting in a director’s seat in an insurance company. Nonetheless, here I am – and I love it,” he said. He is Director of Member Engagement for Catholic United Financial, a member-owned organization that provides life insurance and retirement products throughout Minnesota, North and South Dakota, Wisconsin and Iowa.

“We’re sort of a financial cooperative,” Lamusga said. “People become members by buying life insurance and annuities. They have a say in how we do business. We have programs that we offer to members and parishes, and our members then take advantage of those to amplify their giving.” For example, Lamusga said, at the Gather for Good event, volunteers put together personal care kits for homeless shelters. “There’s live music and excitement, and it’s also an opportunity to raise awareness about a serious issue. We fund the entire event including supplies for the care kits. Bringing someone in for an event would be one way to engage people.”

Involving the next generation is “a focus not just for our organization but our industry.” One major change has been moving away from a council system, “a hierarchical model, with a vice president, a recording secretary, a treasurer. That doesn’t resonate with the millennial mind-set. We’ve moved to a parish volunteer team. It’s much more inclusive. The team has a basic structure, but it’s based on skill set.”

Although anyone who owns their products is technically a member of Catholic United Financial, Lamusga said, the level of involvement ranges widely. “We’ve got people out there who are fiercely loyal, they have been volunteers for 30-plus years, they define themselves as a Catholic United member. We also have people for whom this is on the periphery – I needed life insurance, but I’m not necessarily drawn to be involved. The way I view my job is to move Catholic United up that priority.”

The stories, when I find out the good that has come from something we have offered. Each year 80 schools in our footprint get involved in a raffle. Catholics United covers the cost of tickets and prizes, then the schools get the kids going. The school keeps $5 for every $5 raffle ticket sold. All proceeds go back to the school. One school raised enough to add a preschool onto their slate of programs.

The part that I struggle with is the entitlement piece – people who aren’t willing to get engaged, they just want a grant. I want people to do something great. There’s so much we can do. Luckily that’s a small piece.

What does it take to be good at your job?

That’s an “it” factor that’s tough to define. You have to enjoy speaking in large groups, working with people, but also sitting behind your desk planning, organizing, strategizing, looking at data. There’s a breadth to it.

I could see this evolving over time. I just don’t know where. I’m quite happy at Catholic United. My co-workers are fantastic. I have a wife and four kids – three daughters and one on the way. I work to support them. The career makes that life possible. Wherever God takes this for me – I’m just along for the ride.